For the last two days there has been noise in the backyard, suggestive of an interstate highway being built behind our fence. Yesterday it woke me out of my one nap this month and I had to go investigate. I took the camera and I must have looked threatening because the guy roared right up to the fence on his huge machine and shut off the engine for a chat.
Says he “I thought someone would show up sooner or later…”.
“Digging a little hole?” says I.
“No, just making a little dip in the road.” he answered.

I don’t know how often it takes two days to make a little dip in a road, a road which, by the way, I didn’t even know was back there. It was an ATV trail or a raccoon path as far as I knew and very seldom traveled.  The large property beyond our fence is owned by a small private school – half of it being school buildings and a field, the other half creepy woods, thick with palmetto and vines and beasts. When my Dad replaced the fence years ago, we had a gate put in, which turned out to be wonderful foresight. Twice now the school has let us use the field to park cars for events in our back yard – both of them weddings. 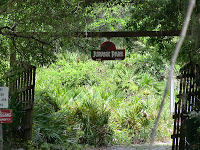 So dozer driver’s parting remark before he fired up the machine was that they needed the dirt for a berm and decided to get it here to make it a little more exciting for their Jurassic Park entrance. We have Jurassic Park behind our fence! That explains some of the weird noises and the large flying creatures we see from time to time. And now I have an idea for a theme that will make the next wedding the best ever.