Recently we spent several days at Bayou Hammock on Longboat Key, Florida. It was a “forced” vacation due to fumigation of our house, but a nice respite in any case. One of the hallmarks of our time there was the chance to become familiar with a pair of nesting osprey. 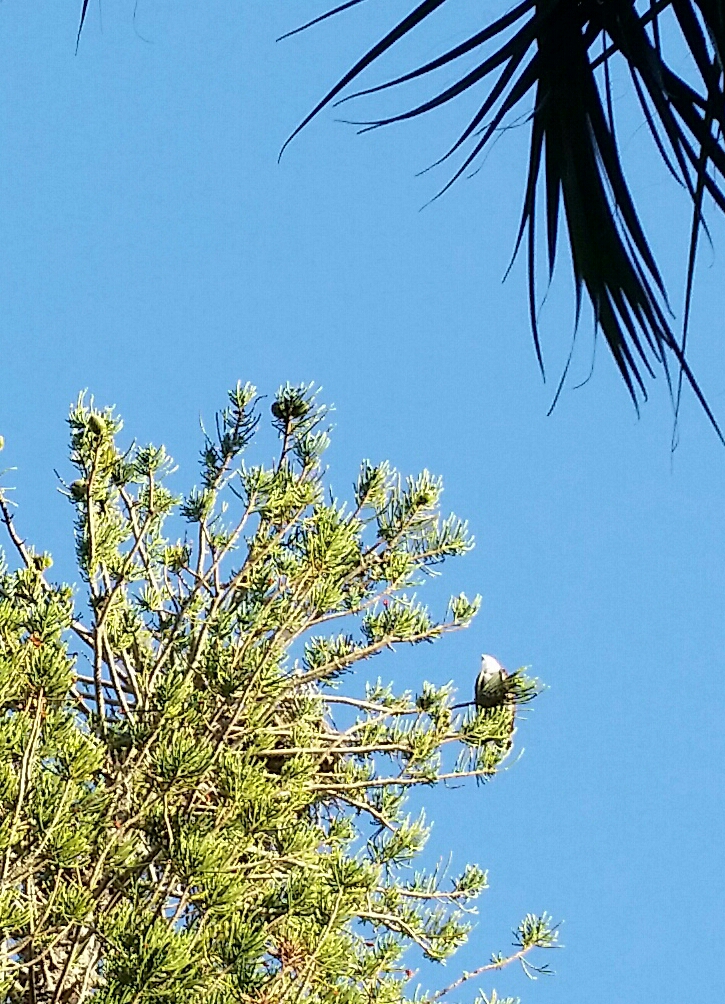 The “bayou” part of Bayou Hammock is a shallow finger of the inland waterway as it curves into Longboat Key at the northern end. From the dock where we view it, it looks like a river and we can easily see the opposite bank. This is a populated area with houses and docks and boats. Because the water is shallow and warm, we often see fish jumping, ducks and other water birds, and occasional manatees. Mangrove thickets line the shore along the property where we stayed. Banyan, juniper, sea grape and Norfolk pine are further up in the yard. It is the Norfolk pine, situated just outside the pool cage, that drew our attention.

This tall, narrow tree sticks up far above the rest of the canopy and has on its top a messy nest, almost like a crown. I can imagine that the view is great from up there. But it was the frequent whistles and calls that drew our attention skyward. A pair of osprey had set up housekeeping and were actively flying to and from the tree top. Think of an osprey as a “fishing eagle”. They are large birds and have a diet, almost exclusively, of live fish.

They are well designed for fishing. Get this, the average time fishing before they catch something, is twelve minutes. What fisherman wouldn’t like that! They have one reversible claw on their feet enabling them to put two claws on each side of their catch. They can only do shallow dives, up to three feet, but their rate of catch is 70%, which is admirable. They can carry a load of one to two pounds, and interestingly, they align their catch head first when flying to decrease wind resistance.

Our pair of osprey were easily identified because of their white underbelly and chest.  Another trait is their wing position when flying. They have a bent wing, giving them an “M shaped” profile when flying. We thoroughly enjoyed living alongside this interesting part of God’s creation and wish them well in raising their brood.