Who has seen the wind? Neither you nor I. But when the trees bow down their heads, the wind is passing by.   Christina Rossetti

It is a noisy morning here – blowers, saws, vehicles coming and going – and out on the street emergency trucks are dealing with the downed electrical wires and traffic is down to one lane, taking turns going east and west.

Last night it started to rain. I was awake and heard it intensify, hitting the metal roof. The main gust of wind was frightening and I remember being thankful we were in a cement block structure. It was short and quieted down immediately after. The intermittent beep of the smoke alarm, like a low battery signal, was all I heard until my daughter got up and took it down. The electricity was off, but we went back to sleep without a clue to the chaos we would see at daylight.

The beautiful farm where daughter Julia rents a small house, sustained heavy wind damage in that storm.  Our view of the main house, out her front door, was obscured by the giant oak that had fallen. Oh, the trees, it makes my heart sick – anyone who has read my blog knows how I feel about trees. Just last night we had the sad job of burying Rodgey the cat in a garden area next to several beautiful trees, on a mound with a swing attached to them. The garden is now invisible and covered with the limbs of those trees that were ripped off. A large cattle feeder from an adjoining field was deposited under what is left of one of them. Oddly, the swing is still there.

There are several areas of downed board fencing, a couple of them right on the road. A herd of mini horses that were kept in that field evidently left through the break and came back in again in a different place. They were racing around loose in the back of the barns when Julie found them.  Her own horses were safe and in place, but the shelter in their field was dismantled and distributed all over the pasture to the north. The fence was gone there too.

The owner of the farm has come to survey the damage. She is a businesswoman who has a construction company of some kind and has already dispatched many of her workmen to the farm to clean up the damage. Indeed, there are already blowers and chippers running everywhere and loads of limbs being hauled off. “It will look better by the end of the day,” she told us. But it will look different than it did before the storm. 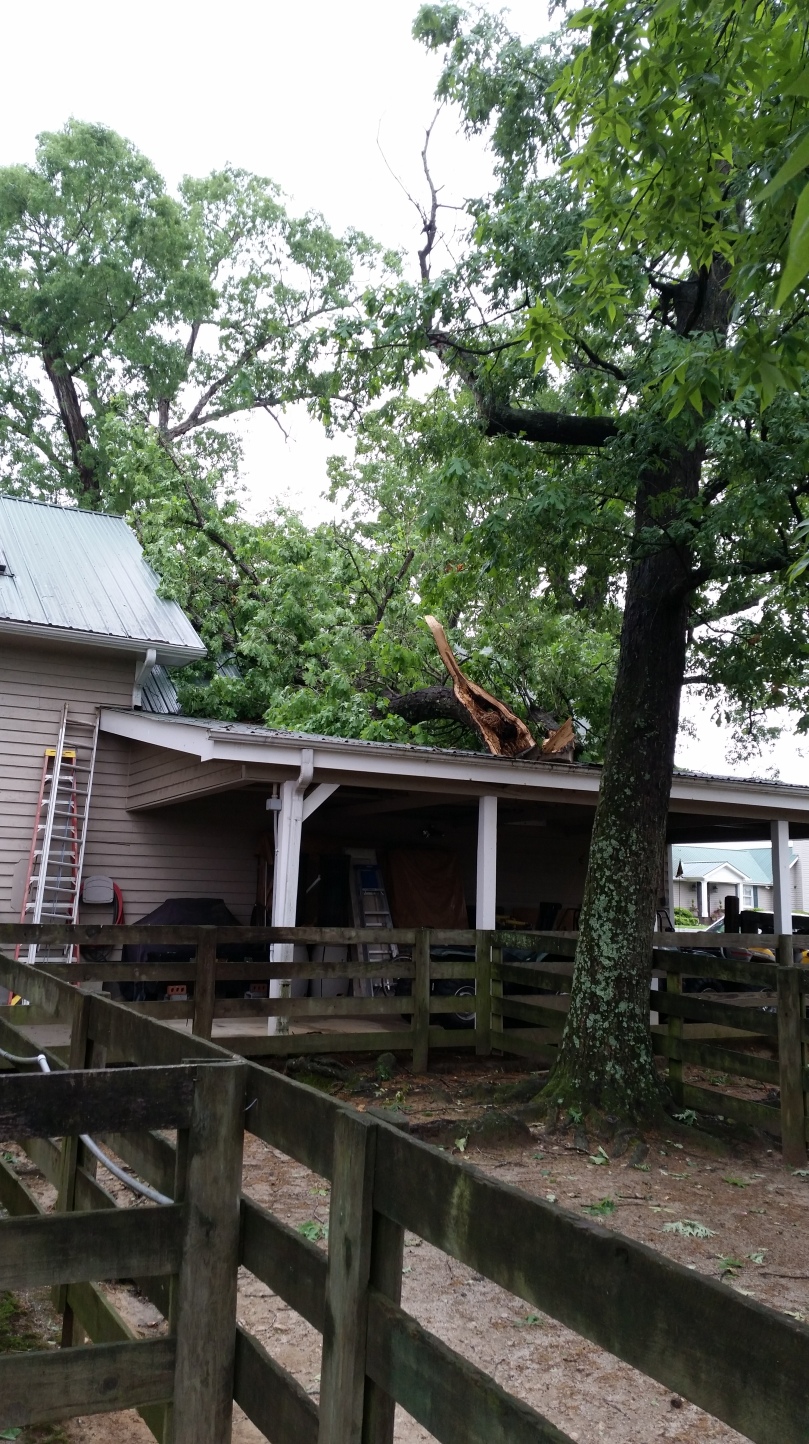 As we look around outside, it is very obvious that we were spared loss of life, and even serious property damage. It’s a strange sort of day here.