I’m not done recording details about the visit to Hayward, Wisconsin. The Chamber should be paying me for this…

It was thirty years ago but I remember it  like it was yesterday. Two moms, one with two little boys and one with two little girls, needed the kind of break from routine and stressful lives that only nature can provide. They were campers so they loaded up and traveled to an out of the way spot. It was an abandoned fish hatchery, state land I suppose. The cement tanks that had been embedded in the ground to harbor the young fingerlings had been removed and the field grasses had grown to cover the areas. The small road, two tracks with grass growing in the middle, crossed a stone bridge which covered a creek, Hatchery Creek. Chalk it up to mid-westerners to avoid having to name things, by just calling them what they are.

I was one of the moms. I had driven down the road one day looking for a place of childhood memories.

Sundays, with the whole family in the car, my dad would stop on the way home to look at the fish, in particular the large sturgeon who lived in his own special tank. Other tanks were rippling with the motion of the young fish waiting to be released into northern Wisconsin lakes and streams.

But in 1987 it was obvious that the program had been discontinued and the sign indicated that the natural stream that ran through the property was being restored as a trout habitat. There were no buildings left, no signs of recent activity, just a beautiful meadow surrounded by hills decorated with hardwoods and pines. It was the perfect place to camp. I could hardly wait.

In this day of protected lands, designated camping spots and required permits to camp, it is hard to imagine someone just picking a place in the woods and deciding it’s the place for them. If we were trespassing, I didn’t know it. Plus, we were gutsy women who loved to make independent decisions, and we made the decision of where to put the tent, where to make our campfire and told our kids where they could explore.  That’s what they did all afternoon. 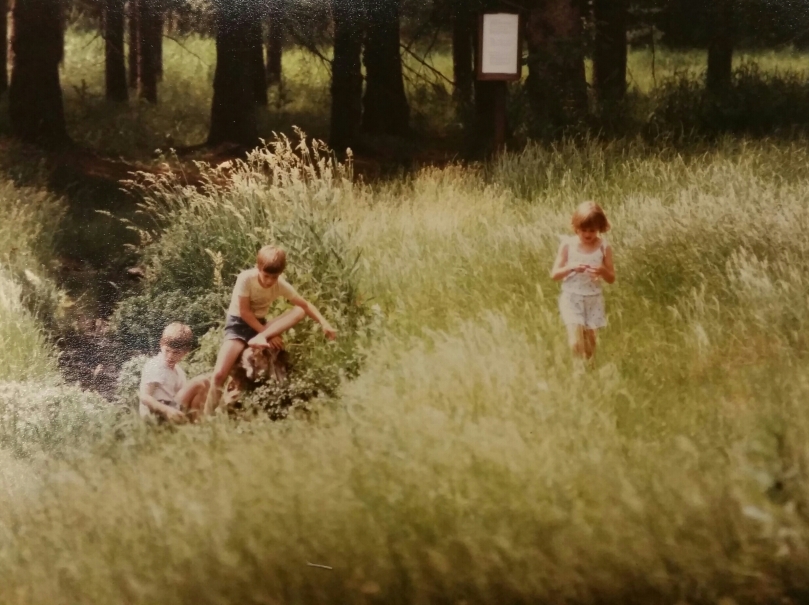 There is something so compelling about a creek. It’s more personal and approachable than a river. Rippling and clear, musical, fordable, a creek begs you to follow it up river because it has to start somewhere. What would that look like? This particular stream was easiest to follow if you got in it. The banks were sometimes purposely undercut to provide hiding places for fish and the grass and bushes on the banks were tall. A person who didn’t know the stream was there might have a hard time finding it. But you could walk in the middle in water never more than knee deep and every now and then there would be stones or boulders to stand or sit on. The kids were having the greatest time and we were watching, with cameras in hand. 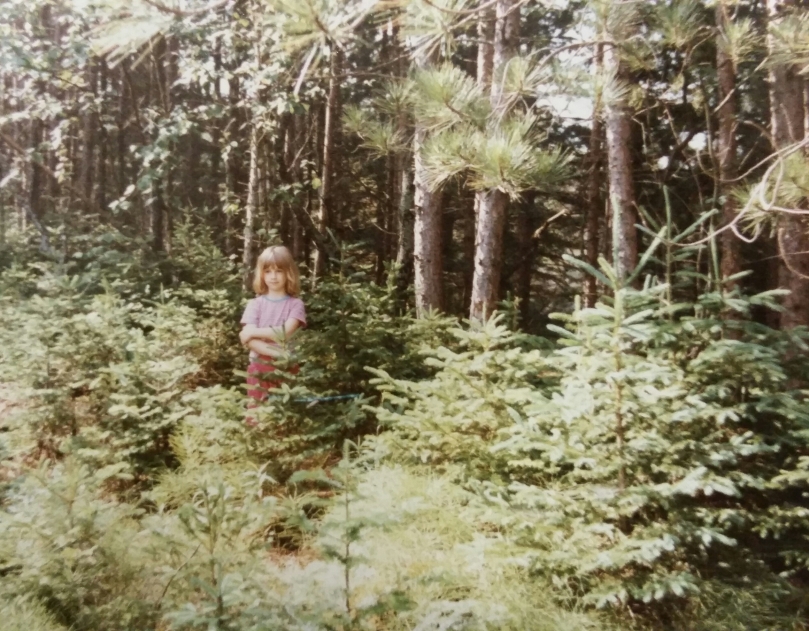 I had to work my way through head high foliage to get to the place where it looked like water was welling up out of the bottom of the creek. It may not have been the birthplace of the stream but it was certainly adding the major portion of the flow. I have a weird fear of holes spewing an endless flow of water. If I stepped in there would I disappear, falling endlessly like Alice down the rabbit hole, only this hole is full of water which kind of rules out being able to breathe?

I’m again back in childhood, ice skating on the farm pond and hearing Dad tell us to stay away from a certain area where springs kept the ice thin. Springs were mysterious, like faucets that never get turned off.

The rest of our camping trip was spent cooking supper, sitting around the campfire with visiting grandparents, and sleeping through the night with one eye open. It was “that season” of the year and our tick phobia was full blown by the time we left, nevertheless it was a memorable time for me, and that is why I revisit Hatchery Creek most every time I go home to Hayward.

Two weeks ago daughter Esther and I went to the area where we had camped and observed the ritual of wading in the creek. She was the youngest of the four children present and does not remember the time and the place as clearly as I do. It has changed. It is now an access point for a series of trails including the Birkebeiner ski trail. It is used year round by many people who want to hike or single track through the woods, or skiers practicing their hill climbing and cross country skills. People do not camp there and I feel a bit sneaky (and smug, and fortunate) for having done so. The creek is still flowing, although it seems to have taken second place to the footpaths through the woods. I know where that spring is. I still find it mysterious and I still wonder how it keeps coming, and coming, and coming…

One thought on “Then and Now: Hatchery Creek”