There is no getting past it – we are definitely into winter now. It looks so much like last year’s many months of winter that I’m wondering if my hazy recollection of summer was just a dream. Maybe the snow never goes away. That’s how it seems as we anticipate the fourth snow in the last two weeks.

Every day when new snow has fallen I hear the plows starting to work, early before light. The major highways, two of them, near our house have to be kept as clear as possible. There are also quite a few big parking lots. It is early in the season and more snow can be expected, which means that room must be made for it. My brother plows our subdivision and he pushes the snow as far back on the lawns as his machine will allow. He makes the road as wide as possible.

On the other side of our back fence, the Walmart Alps are forming. The parking lot is rimmed by white peaks, large enough to be dangerous should they tumble down on someone. I had to take pictures, amazed at how much they resemble real mountains with cliffs, abutments, scree and all. 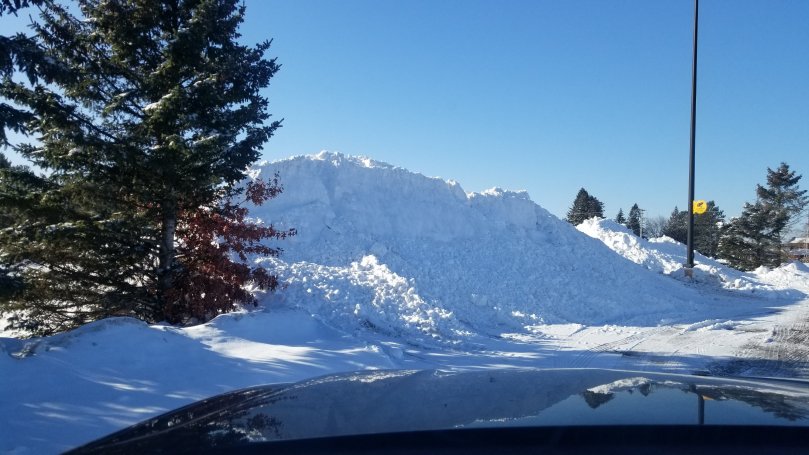 On Monday I tried to get into town during a snow. Our drive had been plowed but when I got to the slight rise onto the highway my wheels just spun. I back up and tried several times with no better results, so I turned around and went back home. I do not have 4 wheel drive. Even though the back of my truck is loaded with sand bags, it doesn’t provide enough traction to match the slush covered ice. It is an every day occurrence to feel the vehicle fish tailing on corners. A different set of driving skills is in order.

The wetland fields are getting a deep covering too. I walked there this week, thinking there would be a packed trail from a snowmobile, but no. Nothing had been out there but the deer, leaving trails where they had followed each other. I didn’t have my snowshoes so I cut that walk short. You can get a lot of exercise walking in snow.

Shadow the cat is still wanting to go out, but stands in the snow shaking her feet and licking them. She can’t decide if snow is something she can dig a hole in, or not. Finally she jumps in the snow, squats quickly and comes back to the glass door. Her meow sounds a bit frantic if I’m not there to open it right away.