This will be a short post because I can’t think of a way to explain the irrational love that I (and many other women) have for horses. I liken it to the way that a man will throw money at something like a boat that is seldom used, for I seldom have time or opportunity to be with my horse.

I have been scared near to death on a horse,

injured on a horse,

frustrated nearly to the end of patience by a horse,

money poor because of a horse,

and yet I love horses.

And though, unlike boats, they can get sick and die, also unlike boats they are living and can love you back. They are a bit like people – some handsome, some not so much, some with great personalities, some a little cranky – all kinds of apt comparisons. If you’re at the right end, they smell really nice, like fresh hay and they have wonderfully soft noses. That’s some of it, but like I said, it doesn’t really explain it all.

I have posted this sequence before but it was fun (funny) and I love to relive it.

They were friends.  She didn’t know why it happened and she hadn’t really asked for it.  They had moved in to the house where her new friend apparently had lived sometime in the past.  Let’s call the new friend… call her Kitty.

She knew Kitty hung around, a lot.  Most of the others ignored her or actually shunned her.  But she hung around outside a lot too and that’s why she and Kitty got used to each other to the point of toleration.  She didn’t look for Kitty, ever, but Kitty evidently kept an eye out for her and came running  whenever she came out the door.  As she walked around the grounds she had a companion at her side.  When she sat on the deck at the top of the stair, Kitty sat with her.

Although they didn’t have a lot in common, except the time they spent together, that was enough.  They became a pair, a pair of friends.

It was love. She didn’t mind at all.

Tessa with her friend, Kitty

Today Dr. Julia had only one appointment and we were going to spend a good part of the day switching her vet box from one truck to another – a process requiring a lot of unloading and reloading and four strong men to do it.  Unfortunately the doc has also been on call all day.  It is now dark and she is still giving shots to Howdy, Whiz, and Li’l Snip.
It’s been a long day and a hard day. The worst of it was euthanizing a sweet little mini who was in severe colic. We shed tears along with the family over that one. Those are not easy decisions to make.
And we have not even started switching trucks. Maybe tomorrow.  Some days are just this unpredictable. 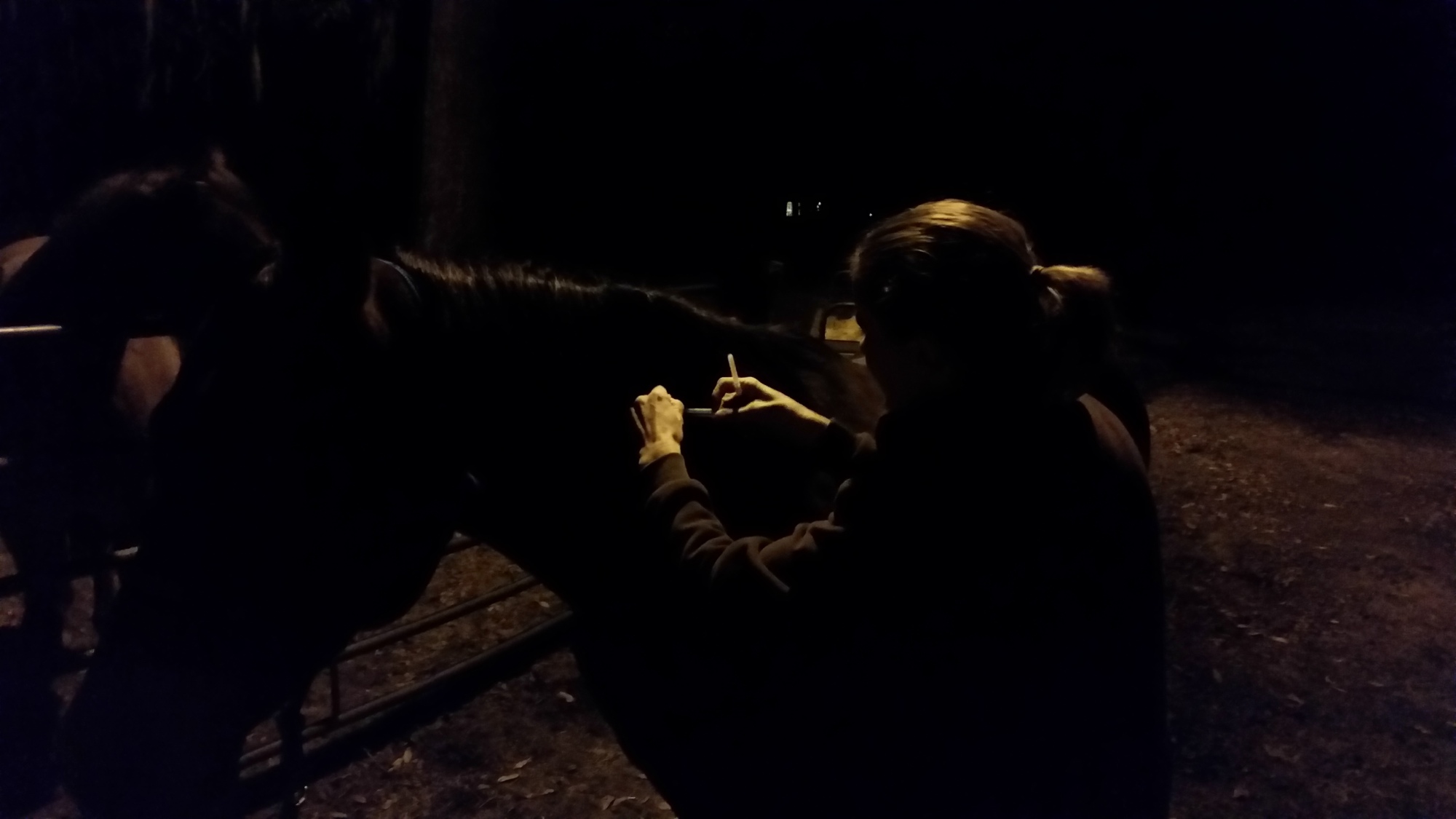 Things change.  Back from a ten day trip, I spent the morning picking up the water bowl, the food bowl, cleaning out the litter pan, putting the towels and sheet used for bedding in the laundry, uncovering the furniture in her “sick” room.  Then I sat alone at my writing table thinking about all the times that sitting there would have guaranteed a cat in my lap within a couple minutes.  I will miss her and she was a good cat.

She came to us as a kitten, found alone by one of my daughters in a city parking lot.  She was very young, very scared and spent the first week hiding under my daughter’s bed.  We weren’t sure if she would make it.  What a way to start.  I think her memory of that contributed to her quietness, her timidity, her reclusive nature.  She grew to tolerate other cats but was never one to initiate friendship or cuddle up to any of them.  She grew to trust some people and be affectionate but that trust had to be earned. The sound of strangers in the house always made her disappear. She would come out from her hiding place when things got quiet again.

her magnificent green eyes and a pretty white bib

When my daughter moved away to school she left Grey Kitty with me, which was fine since I had grown fond of her.  I had inherited another cat from my second daughter and it would have been nice if they had gotten along but they didn’t.  They fought like, well, like cats.  They had both grown up being “only cats” and didn’t want to share their humans.  We had to keep them separated or there were consequences of loud cat growls and tufts of fur everywhere.  Once when we were away they were accidentally shut in the same room.  We found them sitting quietly in opposite corners pretending nothing had happened, but the room told a different story, way different.  I thought they might have gotten it out of their system and become friends, but no.

Grey Kitty was hesitant about all kinds of things.  There was the usual cat maneuver of standing in front of an open door, debating whether or not to go through.  She had the nervous tail tic.  It drove me crazy and I would sometimes pick her up and make the decision for her.  But most of the time, in deference to our friendship, I just waited until she either bolted out or sauntered in the other direction.  I think my willingness to let her be who she was made her like me as much as she did.

She had patience with me as well,  Many times she would come up on my lap and get settled for a good sleep and minutes later I would have to get up to answer the phone.  She had patience in the kitchen. She knew the sound of pans rattling and cans opening and would appear at mealtime.  After circling my feet for several minutes in an attempt to get my attention (trip me) she would sit quietly and look at me with her best stare.  The stare would continue right up through the meal until the husband would relent and give her a small bite of people food.

One day, years ago, I thought I had accidentally killed her.  She was in the garage when I closed the door automatically and turned my back to go into the house.  For some reason she waited until the last second to try leaving and got caught under the door.  When I looked again I could only see the back half of her and the door was down.  She evidently had been crouching low and hadn’t triggered the safety beam.  I slapped the control and ran to get her but she ran out faster than I could get there.  I was pretty worried about her but decided if she could move that fast she probably didn’t have a broken neck.  She was always a little leery of the garage door after that.

As she grew older, she began to be a very picky eater.  Dry cat food was not good enough.  Canned cat food was better, but only certain kinds.  She started losing weight, and her breath smelled awful.   Tests at the vet’s office showed kidney disease, so we tried various brands of special food.  She didn’t like any of them.  Finally, to keep her from starving I let her eat anything she would eat.  She was pitiful, and her soft meow changed into a more raucous sound that was disturbing and insistent.  I think she had nausea.

This story ends as you might suspect by now.  I took GK to my daughter the veterinarian and she and I, compassionately and with tears, euthanized her and laid her to rest.  She served a purpose in my life, as I believe animals were meant to do.  These awesome creatures that God made to share the earth with us make us think, make us love, make us give of ourselves and make us aware that we are not alone.

P.S. This is not to be interpreted as a request for another cat.