I grew up on a small farm in northern Wisconsin – a place where  nature is not all that friendly to farmers.  Summers are short and cool, winters seem endless with lots of snow and cold weather.  The area is kept alive by tourism and is a playground for hunters, fishermen, outdoor sports enthusiasts and others who just want to get away from the larger cities in Wisconsin and nearby Minnesota.  I is a land of lakes and I have been on many of them, but my favorite is Round Lake.  Others will say the same.

A road winds past my childhood home, around a small pond and climbs a wooded hill. I spent a lot of time looking at that hill from the front yard and from my second story bedroom window.  At some early point I must have seen some people on horseback riding up the hill at a gallop because I recollect a romantic notion of there being a castle up there waiting for knights to arrive on their steeds.  My family later became friends with the people on the hill since they had children close to our ages.  The hill became Kendall’s Hill and we also came to know their cousins who did indeed visit them on horseback.

For some reason today I started thinking about that hill and the nearby geography and wondered why I had never thought of it in the bigger picture before.  The centerpiece of it, to me, is a beautiful, deep, spring fed lake with a very unimaginative name – Round Lake.  Parts of it might be kind of round, but I would never have named it that.  In many places it has a very rugged, high and steep coastline. People owning those pieces of lakeshore have their log cabins that we can see through the pine trees and long stairs zig zagging down the bank to their boatdocks.

There is another outstanding feature of the lake and that is a peninsula of high ground that circles out into the lake and back toward the shore.  It had to have been connected at one time because there is a sand bar across the narrow space where it doesn’t connect. It has to be dredged for boats to safely cross into Hinton Bay. Hinton Bay, by the way, is almost perfectly round and maybe that’s the part someone was looking at when they named the lake. I would love to know what kind of geologic activity has gone on to form this lake, and its surrounding hills.  I know there was a lot of glacial activity that gouged out some pretty crazy river beds and valleys and  left a lot of rocks of various sizes. Once I found a fairly large Lake Superior red agate in the lake so I’m suspecting a relationship with the Great Lakes chain.

But there are also some fairly flat lands where people have attempted to farm, as my family did.  The pond between my house and the hill had a couple of springs that were probably fed from the same underground reservoir that feeds the lake. We children who skated on the pond in the winter were always afraid to go too near those places we could tell had frozen over last. The pond has gradually become more marshy and filled in with sediment – it may disappear someday but I probably won’t be alive to see it.

Last month I visited the hill and took another one of many pictures, looking out over the pond to my old home. I’m always hit with nostalgia at the view. What a privilege it was to grow up in such a beautiful place. I spent many years drinking that clear, cold well water and eating food grown in that soil so it’s pretty safe to say it is in my bones. I will always be “from” Round Lake and Hayward, Wisconsin. 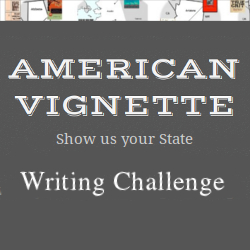 Reader, blogger, and essayist Andrea Badgley is collecting “Show Us Your State” stories for her Andrea Reads America website. Submission guidelines are here if you would like to participate.