I have too many thoughts in my head today and I just can’t sort them out into neat piles on my mental desktop.

Hector was working here at my house when I got home. This is not unusual since we keep adding to the list of things we’d like to have done.  He had taken out the umbrella tree in the back yard.  I didn’t know that was going to happen so I was a bit stunned.  All these years we’ve lived here we’ve just been cutting down the parts that touched the house when they got too big. Evidently Dennis said something about it always growing back and being bothersome – that maybe it should be taken out – and told Hector to cut it down. Well, he did, and dug out the roots too.  It was sort of a beautiful tree, and so vigorous a grower that I always admired it’s ability to rebound. But, no more.  I guess I should begin to appreciate that it will be much easier to take care of that part of the yard now. I’m not horrified, just stunned, and not quite believing that it’s gone.

Today at work, Scottie finally told me what her plans were for going to her mom’s memorial service in Atlanta.  They are having it the weekend of July 14 – 15.  She wants to go up on the 12th stay in Atlanta until the 16th, and then drive to Asheville, NC until the 20th, driving home on the 21st.  And because she has some kind of hotel credits that expire tomorrow at midnight, she wants me to committ to going today.  So much for having time to think it over.  She wants to stay at the Biltmore in Asheville and spend a couple days looking at (and probably buying) art. She says that Cindy will come along to help.  Can I take ten days of it? I don’t know.  Do I dare suggest the trip be altered? Don’t know.

July 16th is when Julie is starting her externship with Sarasota Equine.  She’ll be staying at our house and I’ll be missing at least half of her time here if I go on this trip with Scottie.  How very unfortunate.  The only good thing would be that she might have time to water my plants, pet my cat, and keep Dennis company while I’m not here.

Also in these very same July weeks our condo will go vacant and have to be prepared for a new renter.  We have a good  potential family but they would like hard flooring instead of carpet. My head is swimming with figures for labor and materials, comparing all the variables and wondering whether it’s worth it to go to all that expense or if I should look for another renter. The work would have to get done while I’m away and I’d have to get it approved before I leave.  Hector says “no problem”, he would do it, but he says that about EVERYTHING.

Another major concern is my broken arm.  It’s not the bone that’s broken, but some other part of it sure is.  Working is painful and I’m always trying to adjust my movements to avoid further injury. I can never rest it long enough to fully recover and it is getting worse rather than better.  I’ve mentioned this to Scottie but I’m not constantly updating her and complaining about it so she’s probably not taking it into consideration.  There’s not much she could do about it anyway since I’m once again the only day nurse that she has.  Peruvian Mary gave her two week notice.  Even though she needs the money desperately, she just can’t handle the physical requirements. I was worried that might happen.

So in the next two months I guess we might find more nursing help to give me some time off.  I guess my arm might get better.  But I certainly won’t know any of that by tonight when Scottie wants to make her reservations.  As I think about all this I can see out my window – all the beautiful branches from the umbrella tree on the ground.  I’m just saying it’s kind of sad… and I’m momentarily confused. 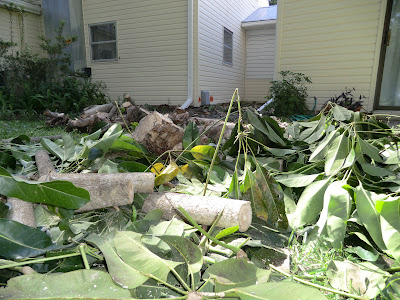