I’m thinking about the fun time I had last night at the baseball game. Normally, baseball is not one of my passions. As far as watching the game, I put it a notch above golf on the excitement scale, which is why I have only gone maybe three times in my life. However, the whole ambience is interesting and attractive – the crowd, the camaraderie, the food, all that.

I really did not know much about the nuances of play and the organization of the teams and leagues but luckily, daughter Julia’s special friend Kevin, was a baseball player in a semi-pro league. He was the host for this night, and through family connections he had tickets to a box suite. It is a whole different experience to have a choice of air-conditioning, or outside balcony. Add in free popcorn and peanuts and it becomes a place I could take for several hours whether there was a game to watch or not. It was also informative and entertaining because Kevin’s three children were along, getting tutorials from dad on the plays.

I once did a stint working refreshments at several baseball games in Florida. I didn’t get to watch those games but I did learn that people spend way more on refreshments than they do to get into the game, in most cases. I didn’t need a hot dog or other food but I was thirsty enough to order a souvenir cup of Dr. Pepper for $ 6.50. This will help me remember the experience. 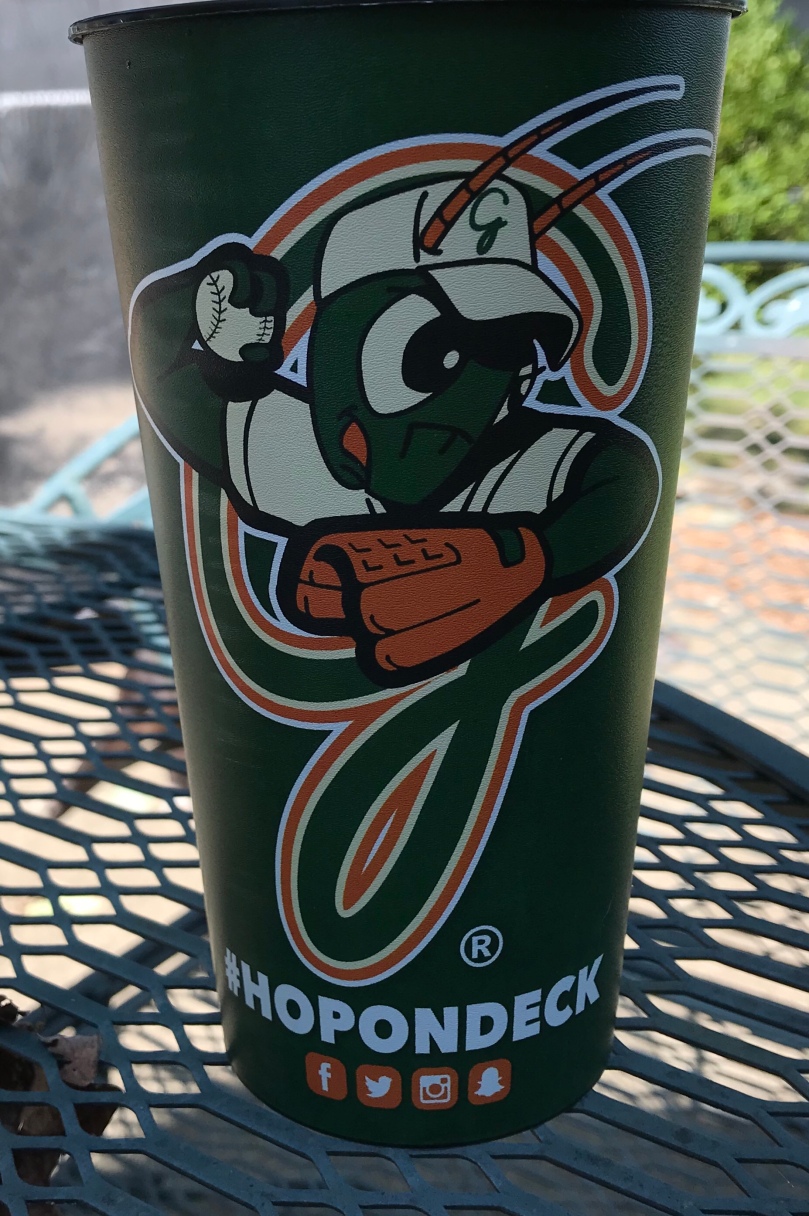 Another reminder will be the picture that the kids and I had taken with the team mascot. You wouldn’t be able to tell, so I will inform you – he’s supposed to be a grasshopper. He wanders about, with an escort to help him see where he’s going, getting pictures taken with youngsters. I kind of snuck in there. It’s not every day I get photographed with an insect.

The Grasshoppers are the local team in Greensboro and, fortunately, they won by a healthy margin. The league is entry level professional and most of the players were right out of college, or even high school. All those long breaks waiting for the pitcher to decide to throw the ball were filled with chants, cheers and commercials over the loud speaker and on the giant screen at the back of the outfield. There was also pure silliness going on from time to time promoting the game sponsors. These cows came out and danced the chicken dance – thank you Chick Fillet.

In this league, occasional heckling and teasing was allowed but kept nicely in line by an announcer who led everything with sound effects and cheers at every opportunity. Nice idea and it worked.

And there were fireworks. Impressive ones.

Great night, beautiful stadium, family friendly atmosphere (including a real live rendition of “Take Me Out to the Ball Game” by the announcer and some kids) – all the things baseball has been and should probably be. The one sobering moment was at the gate where, as times require, my purse was searched and we had to go through metal detection. I had to take my jacknife back to the car. Oh well, …