Time has gone by minute by minute, and our vacation is almost over – something to be looked back upon. As usual, it never seems right to be leaving part of my family anywhere, anytime. Julie and the dog had not yet left when we drove away from the motel.

Yesterday was by far the highlight day of our trip. Julie had to leave Tess the dog at the motel with Dennis the husband while we did our day hikes. Dogs are not allowed on most of the trails in the park. Husbands are allowed, but only if they want to go. Dennis is still not up to hiking and has had an uncertain time with his blood pressure and medicine side effects.

We chose to go to Grotto Falls first, knowing that it would only get busier as the day progressed. It is a shorter hike and close to Gatlinburg so many people are taking it.  We did the 1.3 mile uphill climb, taking pictures along the way. The woods was beautiful, as was the river. The falls itself is known for the path that goes under the waterfall.  Being there, with that wall of rushing water between me and the world was quite cool, literally. Natural air conditioning courtesy of the turbulence of air and water and shade. It’s a unique and beautiful experience.  People of all ages were standing around on the rocks, nervously watching their children trying to get close to the water, taking pictures, drinking in the aura of the place.

We took our own pictures, went a short way up the trail on the other side of the river and then headed back the way we had come. Mount LeConte was more than six miles away up the trail and not on our list for the day. 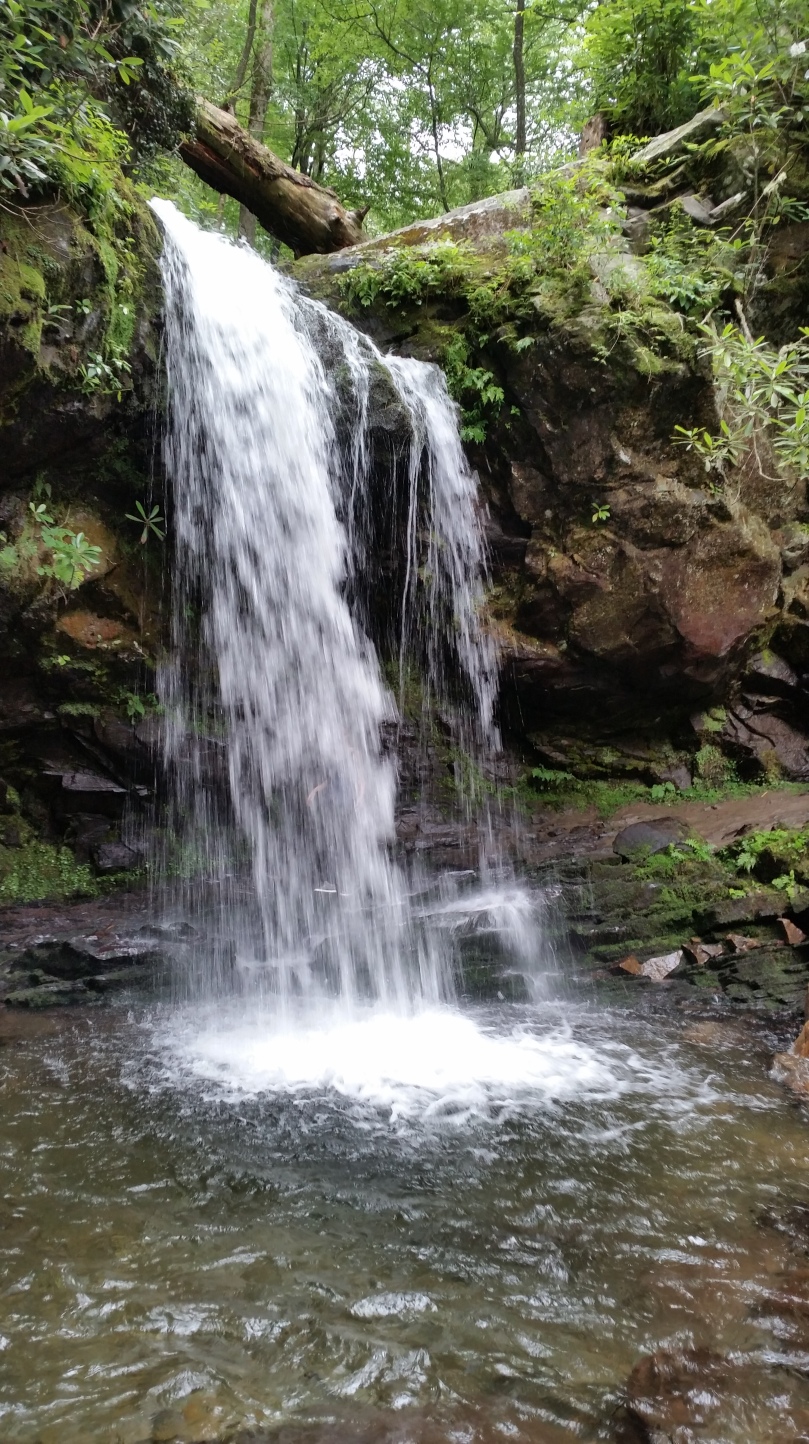 The Roaring Fork Nature Trail is a one way motor loop up to Grotto Falls and was a great way to see the forest and several more creeks.  Going back down through the woods was fun but the best part was at the end, nearly into Gatlinsburg, when the line of cars we were in slowed and stopped.  People were out on the road taking pictures of something, which turned out to be a bear. A few seconds later another bear, on the other side of the road, came nearly up to our car. I think it was a mama and cub that got separated.  The mama looked a bit confused and didn’t want to cross with all of us in the way. I hope they got reunited.  WE SAW A BEAR! Unexpected bonus. I’m glad we were in the car.

Our second hike was a loop starting with the Little River Trail, to the Cucumber Gap Trail and ending with the Jakes Creek Trail. We parked and headed upward along one of the most beautiful rivers I’ve had the privilege to see. It was full of rocks, some as big as a small house, and the rapids and pools were everywhere a wonder. This trail was a road in an earlier age when wealthy families from the cities came up to cool off in their summer lodges. The Park Service has since bought the properties and is taking the old buildings down, leaving only the chimneys and fireplaces that look like monuments along the road.

The Cucumber Gap Trail was smaller and more typical of Smoky Mountain hiking trails. It was on this stretch that we noticed the weather was changing. It was getting darker. Then it was thundering and lightning. And then, of course, it was raining.  At first the canopy kept us from getting too wet, but the trail was heading upward still. The canopy was thinning out and providing less shelter. I thought of all the places I wouldn’t want to be in a lightning storm. Sure enough, on top of a mountain with my feet in a puddle was one of them.

These trails are for people when they’re dry, and for water when it’s raining. They become little rivers with slick, muddy bottoms. At times we could walk on the bank above or below the trail (in the poison ivy) and other times there was no option but to get our boots soaked. I was so thankful for my new trekking pole. It was a lifesaver. We stopped taking pictures and wrapped our phones in plastic. You are being spared seeing us looking like drowned rats.

This was a near six mile hike and we decided to say that at least three of those miles were in the rain. We actually enjoyed it, realizing that it was an experience we might easily have missed, since we never would have started out in the rain. The wetness, the uncertainty of the storm, the added difficulty of the trail was just enough of a “rush” to make it memorable. I loved it. Towards the end, as we were searching for the parking lot and our car, we were getting a bit hypothermic. The temperature was down to 67 degrees and we had been wet for quite a while. Now I have a “hiking in the rain story” with each of my daughters. Thankfully this time it wasn’t 32 degrees, and we weren’t camping.

The day ended well with hot showers, dry clothes, and a top notch dining experience at the Old Mill Restaurant in Pigeon Forge.  What can I say? It has been a great trip, hotel expense courtesy of BlueGreen vacations.  I’m writing in the Knoxville Airport, where our flight on Allegiant has been delayed 3 hours. That’s about the only inconvenience we’ve had to endure. And no, we didn’t buy a timeshare, just sayin’…