Most people my age have had numerous pets of their own, and also have had their children’s pets to contend with. In addition to that, I have a soft heart for strays of all kinds and have successfully passed the gene on to my daughters. I have grandpets. I truly know the joys and sorrows of pet ownership. Most people my age could live very well without any more pets, thank you.

But there was this small cat, barely out of its kitten hood, that my brother and his wife found. It was under their car as they were leaving a graduation party this spring, mewing pitifully. It was skinny, wet and cold, probably hungry. And it was black. For some reason, being black is a strike against a cat. They are least likely to get adopted once they are abandoned. My brother tried but could not find the owner and since the cat was overwhelmingly friendly, they took it home.

More than that, they had their vet look the little creature over and give it some drops for its eyes and an appointment to be spayed. It was litter trained already and acted grateful for a warm bed, food and people petting it.

This is where I came in, thinking that the husband might enjoy having a cat to pet and take care of. He’s retired and spending a lot of time at home without much to do. He’s gotten attached to cats in the past. It seemed reasonable. And the first few days, when the cat was tired and half starved, were peaceful days. And then it got frisky.

Now, several months later, I am very much reminded of what cats do. I have wiped up mounds of semi-digested cat food from the carpet. I have awakened in the middle of the night to find the cat sleeping on my chest. I have taken to smelling any pile of laundry left on the floor for the all too familiar odor of cat pee. I frequently walk around the house feeling like the cat is tied to my leg with string, trying not to trip over it. I sneak to doors and try to get through them before the cat hears me. I could go on – you’ve all heard about cats, if not experienced them yourselves.

So Shadow, as my niece named her before I took her, finally got well enough to keep her surgery appointment. We thought she might be in heat because of the way she kept running to open windows and trying to get through the screens. It was hard keeping her inside. I was glad she was getting spayed.

The vet called later that morning. “You have a very lively cat”, he told me. “She’s unusually active (which made me wonder what kind of fun they had anesthetizing her) and it took a little longer than we had anticipated. Oh, and by the way, we couldn’t find any female organs. She must have been spayed already. We looked extensively to make sure so she’s going to be pretty sore for a while.”

She was. There were a few more peaceful days until she had recovered somewhat. I cautiously let her go outside to sit in the sun. That’s what I would have liked to do if I were a cat. I would leave the sliding doors to the patio open just enough for her to squeeze through. She was definitely an indoor/outdoor kind of cat, who loved both worlds. She came running when I called her and loved to nap inside, but was just as eager to get out again.

It wasn’t long after that when I realized what she was doing outside. She was hunting. One morning I found a mostly dead mole, inside the house. I found him by following the trail of blood spatters on the floor and wall. It had to have been a tortuous way to go. This was followed in short order by several frogs who also bled and lost body parts. I got suspicious of her antics any time she seemed to be having fun “playing” with something. 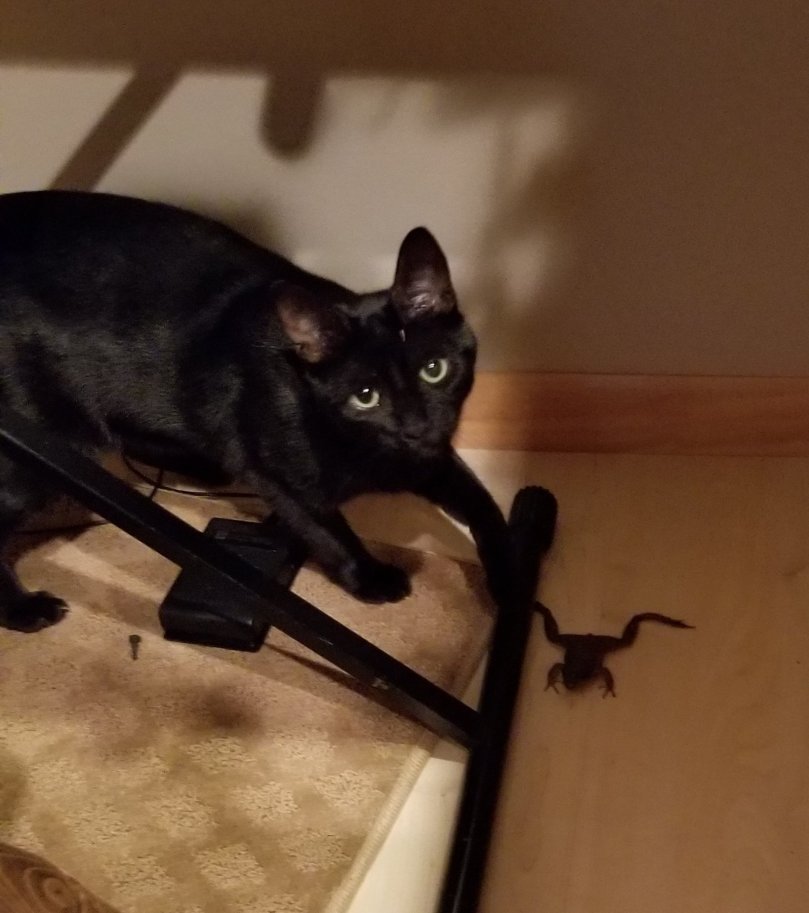 I knew her skill was increasing one day when she brought in a bird. She had it cornered under a bookshelf and I was able to rescue it. It was so tiny and had a numb, dazed look in its eyes. I took it outside, wondering what to do with it, when it flew away!! I had saved it! I wish I could have done the same for the next two she caught. But I had to wonder… how is she catching birds?

We were having dinner on the patio one pleasant evening. The cat was also out and we were watching her tear around the lawn. Without hesitating she aimed at a tree and went up it like a squirrel to a fairly high branch. Hugging the dark branch, with leaves all around her, she was hard to see. I think that’s why the large flock of sparrows flew into the tree all around her and perched – poor unsuspecting things. So now we know she doesn’t wait for them to come down. She goes up and gets them.

This brings me to today. This morning Shadow brought in a small grey mouse and let it get away. She was waiting patiently by the couch where it had fled for shelter, waiting for it to come out and play again. I got down on the floor with the flashlight and witnessed it scurrying back and forth, trying to find a safe escape route. Definite mouse panic. I felt sorry for it, but what could I do? I couldn’t get under the couch either.

Do I hope the cat will catch the mouse? I can’t quite decide. But I am renaming her. I’m calling her Shadow of Death because it fits her very well. Just sayin’…

6 thoughts on “The Shadow, Renamed…”