The Lake and the Swimmer 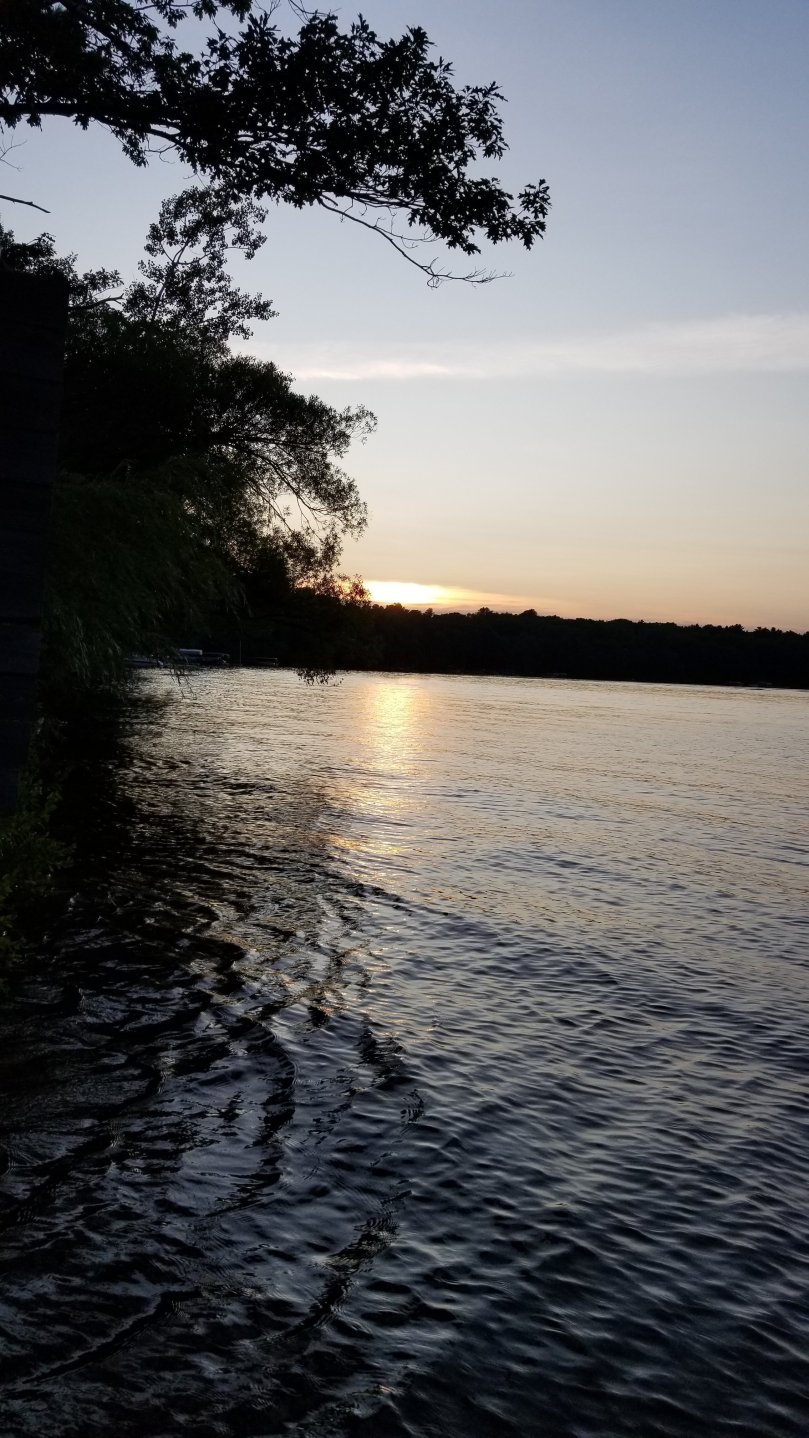 I went through this day feeling like it would have been a perfect day to be at the lake. It was warm, sunny and the weekend. But for me, the most pressing reason was that “almost fall thing” that you can’t quite put your finger on, but you know it when you feel it. People are talking about school starting, goldenrod is blooming, there is a branch here and there with some color starting – scary stuff when summer is short, sweet, and you haven’t been out to the lake enough.

There were, however, other plans for the day. They were good ones and I enjoyed them right up until 7pm when company was gone, the kitchen cleaned up, and I was finally seated in my chair, still thinking about the lake. I felt kind of sad for a minute, and then it dawned on me that the day was not over yet for another hour. The lake was out there, and I could go. Sometimes I forget I’m a grown up and don’t have to wait for permission, just sayin’.

It’s only seven miles from town to Round Lake, which doesn’t sound like very far now, but seemed like a significant distance when I was a kid. I drove out to the Narrows, a public beach on Round Lake Peninsula at the place where the peninsula is so narrow that you can access water on either side of the road. One side is a boat landing and the other a swimming beach.

When I was young, I felt kind of like my family owned that beach because we went there so often. It was about a mile from our farm and almost every hot day we were there cooling off. Sometimes it was after a sweaty, dusty day helping put up hay. Sometimes it was after milking the cows. The neighbors would come by on their way to the beach and we would throw our inner tubes in the back of the truck and go with them. Sundays after church, we would picnic with other families and spend time water skiing, and swimming until we were “pruney” with wrinkles and blue around the lips from the cool water. 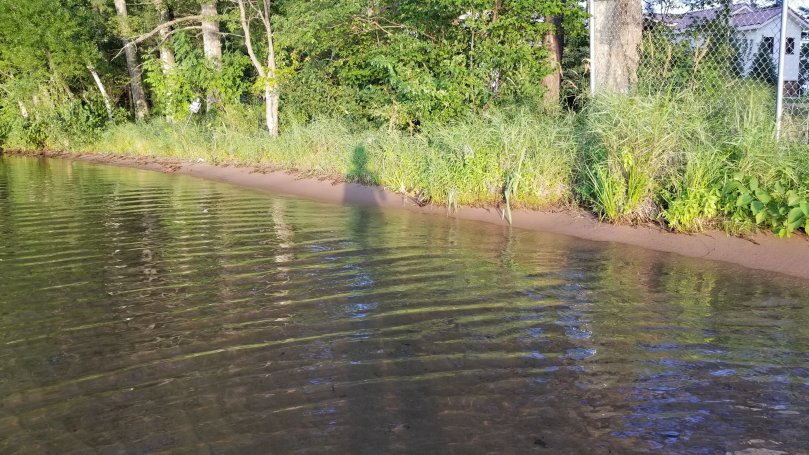 In later years, signs with rules were posted. A chain link fence was added to keep kids from running across the road in front of cars. More people frequented the beach, from town and the nearby reservation and it began to seem more crowded. I swam there less often. When I would walk or drive past it, it seemed smaller than I remembered. The buoy wasn’t out as far, maybe, and there wasn’t as much sand to spread a blanket on. It’s been thirty years away and time will do that to a person’s perspective. I know that.

Tonight, there were some cars in the parking lot with boat trailers but no one was at the swimming beach. I was so glad. It was almost seeming like a spiritual experience to me, one that I didn’t really want to share. I swam and it was still cold. I took pictures because it was still beautiful, the water my favorite shade of blue, the sand my favorite brown, the woods my favorite shade of green. Swimming out to the buoy and looking back to shore, the distance seemed greater, more like I remembered. 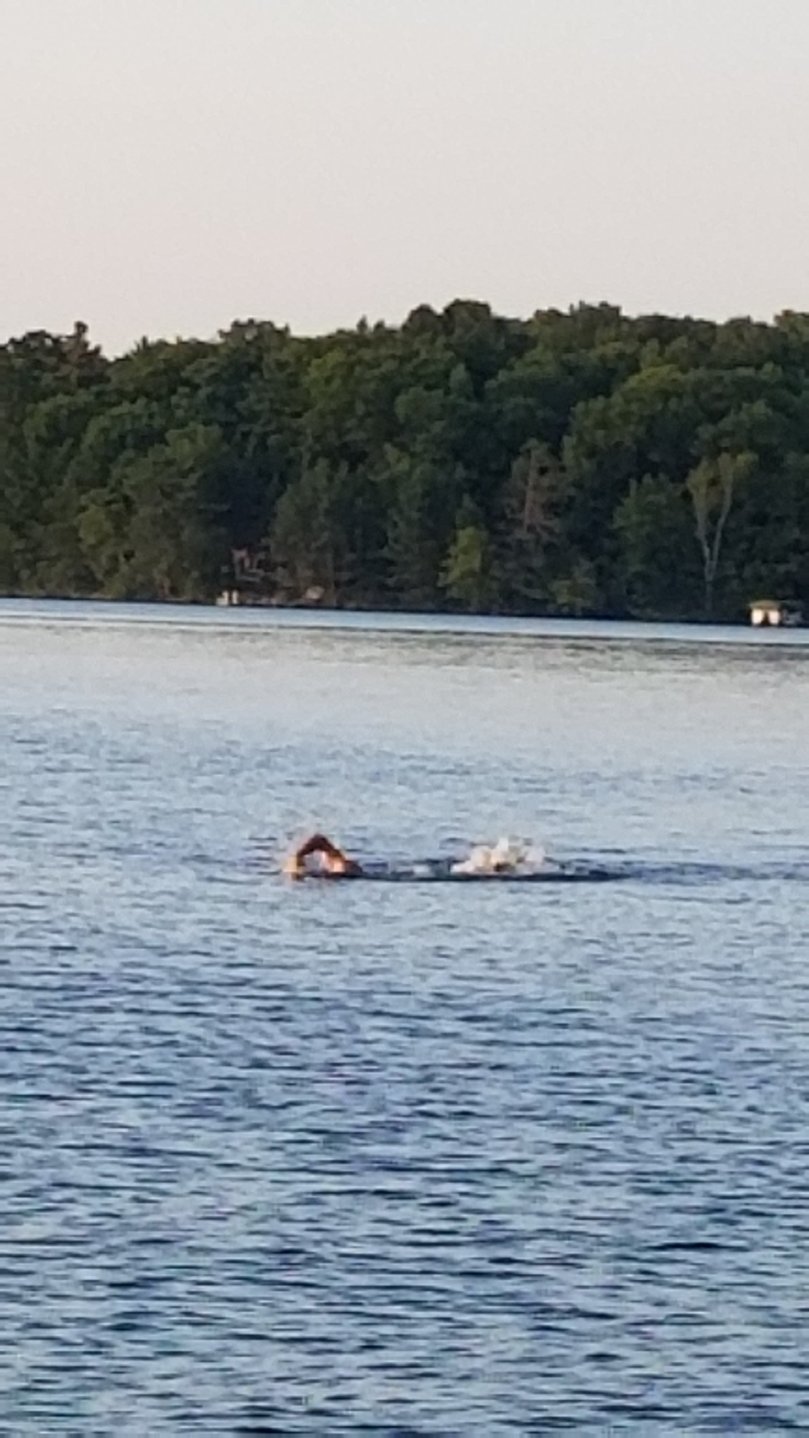 I was out, drying off and about to say farewell to the water when I noticed a swimmer far out on the bay. The person came closer until it was obvious he was headed to the beach where I was standing. From watching him swim I knew he appreciated the lake, maybe even loved it like I did. I even knew that it would be easy to talk to him about it. We talked for half an hour like we had been friends for years.

Paul was his name. His dad had died a few weeks earlier. He was having trouble getting settled down, meeting the right girl. We talked about online dating sites, social/cultural changes, jobs, families. We were both upset about the demographic changes around the lake, and the county. I don’t know why it was so easy to talk to him. I think it might have been just the magic of the lake, and the readiness for serendipity. A small gift of friendship from the God who knows I need moments like this.

With smiles, we said goodbye and headed to our vehicles.

I went to the lake today. I cooled off in that clear, clean water. I met a swimmer. And strangely, it feels like it might have been a spiritual experience.

6 thoughts on “The Lake and the Swimmer”