I am always, ALWAYS thankful for safe travel.  Air travel especially is a marvel in this day and age.  When you look at the statistics, which I don’t happen to have at hand, going somewhere by plane is many times safer than going by car on a road trip.  Yet we all get in cars and travel without giving it too much thought.  But many people have a phobia about getting on a plane.

Maybe it’s being strapped into something akin to an aluminum can, with dozens of strangers….

Maybe it’s knowing that one man’s alertness, judgment and skill determines whether your flight ends well or badly….

Maybe it’s wondering what you would think about for the last 120 seconds of your life should you be accidentally sucked out of the plane….

Maybe it’s walking down that aisle and discovering that your seat for the next three hours is next to… a baby.

A baby that’s already been on the plane for two hours.

A baby who is possibly putting on that look of “I’m done here.” and whose mother is nervously bouncing her up and down on her knee, hoping for the best, whatever that is. 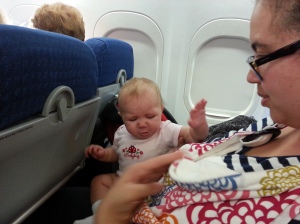 Ellie’s carseat had the window place, she and her mom were in the middle seat and I was in the aisle seat.  I always choose aisle seats.  Somehow it lessens the claustrophobia.

The nice man across the aisle from me felt obligated to say what a good baby she was the whole flight from Ft. Lauderdale.  “Smiled all the way.” he said.  I know babies.  Two hours of smiling at one stretch is about their limit.

Sure enough, as we sat endlessly watching people trying to put their way-too-big carryons in the over head bins, Ellie got tired of being bounced and cajoled and started to, well, cry.  She got red, and angry.  She let her mom know that she didn’t want to be stuck under a blanket to nurse, most definitely not that.  She was hot, sweating, infinitely uncomfortable.

Honestly, at that point I was overcome with sympathy and compassion for mama, because everyone in the plane was turning around and holding her responsible.  Her worst scenario was coming to pass and she had emptied her bag of tricks. (No really the worst scenario would have been trying to put oxygen masks on herself and the baby… I’m guessing.)

“You know, it can’t get much worse. Give me the baby. Maybe stranger shock will quiet her down.”  Was that brave of me or what?  And a second later, with no argument at all, it was me and Ellie.  Seat mates.

She really was a good, sweet little child and this story turned out much better than I hoped.  The change of perspective, someone else’s lap, and the air vent that we opened full blast in her face, quieted her down right away.  Personally I think she didn’t want to be bounced any more so I held her quietly and sang in her ear.  As the jet engines roared  to life (and they were about six inches outside our windows on either side – love the back of the plane, not) and we took off on our journey, Ellie went back to her mom and fell asleep for all but the last few minutes of our flight. Nothing as peaceful as a sleeping baby. I got to look at her the whole trip which was sort of a blessing for my blood pressure.